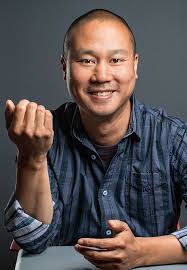 American businessman and online entrepreneur, Tony Hsieh became one of the first innovators when his online networking company LinkExchange (founded) was bought by Microsoft. In his first 40 years, he is an example of success through the quality of hard work. He is also CEO of Zappos - a modern online brand, as well as footwear and online stores. He has also written a book called Directinging Happyness and has invested in some startups too.

“Money alone isn't enough to bring happiness . . . happiness [is] when you're actually truly ok with losing everything you have.”

“Happiness is really just about four things: perceived control, perceived progress, connectedness (number and depth of your relationships), and vision/meaning (being part of something bigger than yourself).”

“Things are never as bad or as good as they seem.”

“Envision, create, and believe in your own universe, and the universe will form around you.”

“There’s a difference between knowing the path and walking the path.”

“If you have more than 3 priorities then you don’t have any.” —Jim Collins”