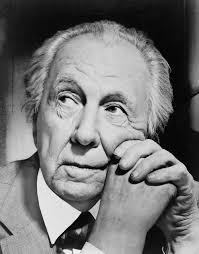 Frank Lloyd Wright was a landscape painter and writer whose distinctive personality helped him become one of the greatest forces in American architecture. After college, he became an assistant to architect Louis Sullivan. Wallight then built his own company and invented the style known as Prairie School, which strives for a "cohesive structure" in home and commercial construction. Through his career, he has built many sound buildings around the world.

If you foolishly ignore beauty, then you will soon find yourself without it.

The longer I live, the more beautiful life becomes.

An architect’s most useful tools are an eraser at the drafting board, and a wrecking bar at the site.

"I believe in God, only I spell it Nature."

"An idea is salvation by imagination"

"A doctor can bury his mistakes, but an "architect "can only advise his clients to plant vines."

"I'm all in favor of keeping dangerous weapons out of the hands of fools. Let's start with typewriters."

"Nature is my manifestation of God. I go to nature every day for inspiration in the day's work."

"Study nature, love nature, stay close to nature. It will never fail you."

"A professional is one who does his best work when he feels the least like working."

"The truth is more important than the facts."