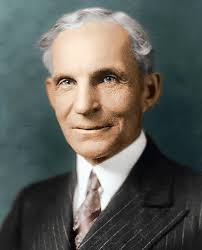 Henry Ford was an American automobile manufacturer who invented the Model T in 1908 and advanced the manufacturing process, revolutionizing the automotive industry. As a result, Ford sold millions of cars and became a world-renowned business leader. The company then lost market power but had a lasting impact on other technological advances, labor issues and U.S. infrastructure. Today, Ford is said to have helped build the American economy during the early years of the country and is considered America's leading entrepreneur.

"Anyone who stops learning is old, whether at twenty or eighty."

"You take all of the experience and judgment of men over 50 out of the world and there wouldn't be enough left to run it."

"When everything seems to be going against you, remember that the airplane takes off against the wind, not with it."

"Whether you believe you can do a thing or not, you're right"

"You don't build a reputation on what you're going to do"

"Many people think that by hoarding money they are gaining safety for themselves. if money is your ONLY hope for independence, you will never have it. The only real security that a person can have in this world is a reserve of knowledge, experience, and ability. Without these qualities, money is practically useless."

"There is no man living who isn't capable of doing more than he thinks he can do."

"Surgery for early stage non-small cell lung cancer is standard treatment and is likely curative. Yet, fewer blacks than whites undergo surgery for the disease, leading to a higher mortality rate among blacks with lung cancer,"

"put the world on wheels."

"My grandfather killed my father in my mind. I know he died of cancer - but it was because of what my grandfather did to him."