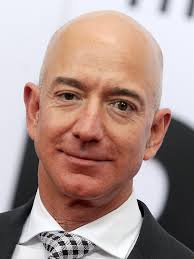 E-commerce pioneer Jeff Bezos is the founder and CEO of e-commerce company Amazon, owner of The Washington Post and founder of space exploration company Blue Origin. His successful business venture made him one of the richest people in the world. Born in 1964 in New Mexico, Bezos had a previous passion for computers and studied computer science and electrical engineering at Princeton University. After graduation, he worked on Wall Street, and in 1990 became the youngest president in the investment company D. Shaw. Four years later, Bezos gave up his lucrative career to open Amazon.com, an online bookstore that became one of the most successful Internet news outlets. In 2013, Bezos bought the Washington Post, and in 2017 Amazon acquired All Foods.

When it’s tough, will you give up or will you be relentless?

Failure and invention are inseparable twins.

A brand for a company is like a reputation for a person. You earn reputation by trying to do hard things well.

If you do build a great experience, customers tell each other about that. Word of mouth is very powerful.

If you're competitor-focused, you have to wait until there is a competitor doing something. Being customer-focused allows you to be more pioneering.

I believe you have to be willing to be misunderstood if you're going to innovate.

It's not an experiment if you know it's going to work

Life's too short to hang out with people who aren't resourceful.

Amazon Pages and Amazon Upgrade leverage Amazon's existing Search Inside the Book technology to give customers unusual flexibility in how they buy and read books.

Are you lazy or just incompetent?