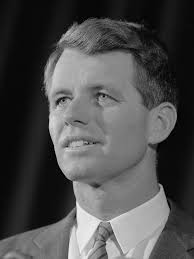 After leading the campaign for John's presidency, President Robert Kennedy was appointed United States attorney general in 1960. As a general lawyer, he fought organized crime and was a leading supporter of the Civil Rights Movement. After the assassination of JFK, Robert was elected to the US Senate representing the New York state. URFK was assassinated on June 5, 1968, during the California Democratic government leadership. He died the next day.

Only those who dare to fail greatly can ever achieve greatly.