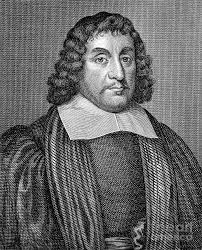 Thomas Fuller's father, of that name, was an Aldwinkle parishioner; The author's mother was Judith Davenant, the sister of John Davenant, who became the bishop of Salisbury. Most of Fuller's early education came from his father. At the age of thirteen the boy entered Queen's College, Cambridge, where his uncle, who was to become bishop, who would soon become bishop, was president of the college and Lady Margaret Professor of Divinity. Fuller later went to Sidney Sussex College, taking his A.B. In 1625 and MMAA in 1628. In 1630 he became an Anglican priest and received the Church of St. Benet's, Cambridge. A year later he was ordained by his uncle, now bishop of Salisbury, at the construction of the Netherbury in Ecclesia in Salisbury. In 1634 Fuller resigned from his position in Cambridge to become a musician in Broadwindsor, Dorsetshire. He took his BD. in Cambridge in 1635 and in 1638 he married a woman from an unknown family. His first book, The Historie of the Holy Warre, appeared in 1639 and, according to modern reports, was popular for many years.

No garden ismotiv without its weeds.