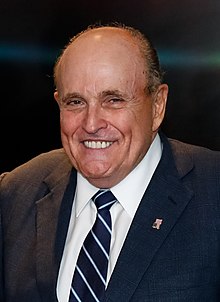 Rudolph Giuliani, born May 28, 1944, in Brooklyn, New York, worked as an independent lawyer with the U.S. Department of Justice. He later won the New York City mayoral race as a Republican candidate in 1993. He sat in office twice, taking a hard look at crime while becoming a divorcee because of his handling of police harassment and racial issues in cases. He later successfully campaigned for his party to be elected President in 2008. Giuliani was once again honored for his strong leadership in the wake of the terrorist attack on the World Trade Center in New York City on September 11, 2001. In time, he began his own career. strong and worked with Donald Trump during the 2016 presidential campaign, before joining the presidential legal team.

Change is not a destination, just as hope is not a strategy.

The lesson of 9/11 is that America is truly exceptional. We withstood the worst attack of our history, intended by our enemies to destroy us. Instead, it drew us closer and made us more united. Our love for freedom and one another has given us a strength that surprised even ourselves.

The only time the private parts of someone's life are relevant is when they're affecting public performance. And just because someone is a public person doesn't mean that any part of his or her private life is open to scrutiny. If someone is doing his or her job, you have to have enough empathy to understand that we all have personal problems.

My father taught me, in boxing, that when you - particularly when you get hit in the face for the first time - you're going to panic. That instead of panicking, just accept it. Stay calm. And any time anybody hits you, they always leave themselves open to be hit.

Courage is managing fear to accomplish what you want to accomplish. And it's a great demonstration of love. It's really what love is. It's finding areas in which other people are more important than you.

I was very serious about being a priest, twice in my life. Almost joined the Montfort Seminary after I graduated from high school. Almost went back in the seminary during college.

Civilization must stand up and combat the current collapse of governance, the rise of violence, and the spread of chaos and fear in many parts of the world.

We should be tolerant, fair, open, and we should understand the rights that all people have in our society.

When you're in a crisis of, you know, tremendous proportions, it's beyond any human capability to control, you just make the best decisions you can, and you just hope that your intuition is correct.

The reality is even if you are a hands-on Mayor or Governor or chief executive, at best, you must know about 10 or 20% of what's going on. Otherwise, you never get through the day... I was very hands on, and there's lots of stuff I didn't know, and lots of things that either went wrong or right that I would find out about afterwards.