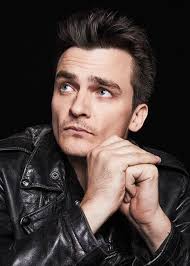 Rupert William Anthony Friend (born October 9, 1981) is an English actor, director, screenwriter and producer. He is best known for his roles as Mr. Wickham in the 2005 film Pride and Prejudice, Lieutenant Kurt Kotler in the 2008 film The Boy in the Striped Pajamas, Prince Albert in the 2009 film The Young Victoria, and Peter Quinn in the Showtime Country series. He also starred in the 2015 film Hitman: Agent 47.

My auditions for drama school were miserable, but one thing I had on my side, although I had no experience or skill or training, was that I wanted to learn everything.

I like Scottish people because they feel very true. They're always level and straight. They get a reputation for being hardened because of it, but I find them to be scrupulously honest people.

I don't think the idea of working in Hollywood really exists anymore. I think you work in films, and where the film is shot is where it's shot. The studio system doesn't really exist.

I really love living in cities where the people living above, below and next to you are from totally different worlds to you.

I don't have a publicist. I don't go to events or self-promote, or endorse things, or whatever it is people are meant to do in that world.

It's great to sit and talk about the films and the people I work with, rather than where I buy my socks or whatever.

People say I have a scary face. I find that to be a mixed compliment.

You fire blanks, but the guns eject real brass, hot cartridges. They're, like, 400 degrees.

I only do the press for the work. I don't have a publicist. I don't go to events or self-promote or endorse things or whatever it is people are meant to do in that world.

This industry is too bonkers to understand. Every single part is completely different.

I've never thought it was a good idea to act back-to-back.