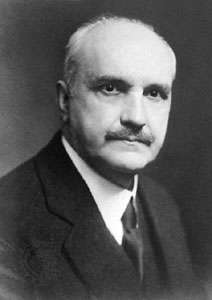 George Santayana was different from American and European philosophers during his long lifetime. While some struggled to make philosophy "science" and apply philosophy and science to society, Santayana declared, "My philosophy also does not want and wants to be science." He rejected the gentle culture that he inherited from American thought and the passing on of deviance, rationality, and positivism. He did not openly like the freedom and democracy of Western civilization. In his philosophy he endeavored to combine materialism with the philosophy of materialism. A writer who expanded the style, reprinted several poems, and his best-known novel was the novel, The Last Puritan (1936). The uniqueness of American philosophy is the unique taste of his thought and his religious and artistic treatment.

“Sanity is a madness put to good uses.”

Those who cannot remember the past, are condemned to repeat it.

The world is not respectable; it is mortal, tormented, confused, deluded forever; but it is shot through with beauty, with love, with glints of courage and laughter; and in these, the spirit blooms timidly, and struggles to the light amid the thorns

A child educated only at school is an uneducated child.

My atheism, like that of Spinoza, is true piety towards the universe and denies only gods fashioned by men in their own image, to be servants of their human interests.

To be happy you must have taken the measure of your powers, tasted the fruits of your passion, and learned your place in the world.

There are books in which the footnotes, or the comments scrawled by some reader's hand in the margin, are more interesting than the text. The world is one of those books.

Knowledge of what is possible is the beginning of happiness

Memory... is an internal rumor.

“Fanaticism consists of redoubling your efforts when you have forgotten your aim.”

Everything in nature is lyrical in its ideal essence, tragic in its fate, and comic in its existence

“Only the dead have seen the end of war.”