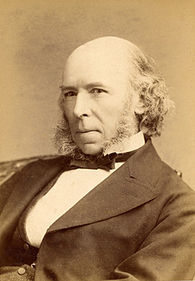 Herbert Spencer was a British philosopher and sociologist who worked in psychology during the Victorian era. He is well-known for his contributions to the theory of evolution and for its application to non-biological, philosophical, psychological, and social sciences. In this work, he coined the term "survival of the fittest." In addition, it helped to develop a functionalist perspective, one of the major frameworks of social theory.

The great aim of education is not knowledge but action.