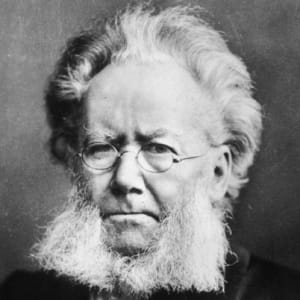 Henrik Ibsen was born March 20, 1828, in Skien, Norway. In 1862, he was exiled to Italy, where he recorded the Brand tragedy. In 1868, Ibsen moved to Germany, where he recorded one of his most famous works: the play A Doll's House. In 1890, he wrote Hedda Gabler, creating one of the most famous theatrical characters. In 1891, Ibsen returned to Norway a literary hero. He died May 23, 1906, in Oslo, Norway.

A thousand words will not leave so deep an impression as one deed.

You should never wear your best trousers when you go out to fight for freedom and truth.

But no man would sacrifice his honor for the one he loves." "It is a thing hundreds of thousands of women have done.

Mrs LINDE: When you've sold yourself once for the sake of others, you don't do it second time.

NORA: I must stand on my own two feet if I'm to get to know myself and the world outside. That's why I can't stay here with you any longer.

Don't use that exotic word "ideals". We have a good enough native word: "lies".

With me you could have been another person.

I don't imagine you will dispute the fact that at present the stupid people are in an absolutely overwhelming majority all the world over.