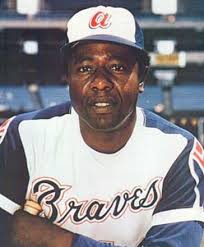 Born in the lowlands of Soft, Alabama, Hank Aaron rose to Negro Le League levels to become the icon of Major League baseball. He spent most of his 23 seasons as a leading man for the Milwaukee and Atlanta Braves, during which time he set a number of records, including a total of 755 home run runs. Aaron was elected to the baseball Hall of Fame in 1982, and in 1999, MLB established the annual Hank Aaron Award in honor of the top striker in each league.

"I'm here to support the commissioner and tougher drug penalties."

"I never smile when I have a bat in my hands. That's when you've got to be serious. When I get out on the field, nothing's a joke to me. I don't feel like I should walk around with a smile on my face."

"I looked for the same pitch my whole career, a breaking ball. All of the time. I never worried about the fastball. They couldn't throw it past me, none of them."

"I don't see pitches down the middle anymore - not even in batting practice."

"The pitcher has got only a ball. I've got a bat. So the percentage in weapons is in my favor and I let the fellow with the ball do the fretting."

"I think it's very much a distraction to the ball club, and that is a cancer, you just get done playing the best team in baseball, the team has been playing very well, despite everything ... it's just a distraction, and it is a cancer,"

"I have always felt that although someone may defeat me, and I strike out in a ball game, the pitcher on the particular day was the best player. But I know when I see him again, I'm going to be ready for his curve ball. Failure is a part of success. There is no such thing as a bed of roses all your life. But failure will never stand in the way of success if you learn from it."

"That's going to be left up to the commissioner and the rules committee."

"That's going to be left up to the commissioner and the rules committee. They would probably have to go back and look at some of those things that happened."

"My motto was always to keep swinging. Whether I was in a slump or feeling badly or having trouble off the field, the only thing to do was keep swinging."