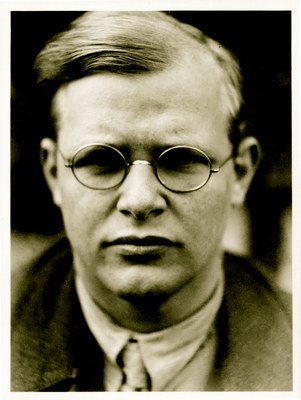 Dietrich Bonhoeffer (Feb 4, 1906 - April 9, 1945) was a Protestant Lutheran minister, a theologian, and actively involved in Germany's policy of Hitler and Nazi policies. As a result of his opposition to the Nazi regime, Bonhoeffer was arrested and executed in the Flossian concentration camp, during the final month of the war. He remains an important symbol of anti-Hitler rhetoric, and his views on Christianity are increasingly influential.

"Judging others makes us blind, whereas love is illuminating. By judging others we blind ourselves to our own evil and to the grace which others are just as entitled to as we are."

"Silence in the face of evil is itself evil: God will not hold us guiltless. Not to speak is to speak. Not to act is to act."

"Music... will help dissolve your perplexities and purify your character and sensibilities, and in time of care and sorrow, will keep a fountain of joy alive in you."

"When Christ calls a man, he bids him come and die."

"We are not to simply bandage the wounds of victims beneath the wheels of injustice, we are to drive a spoke into the wheel itself."

"Jesus himself did not try to convert the two thieves on the cross; he waited until one of them turned to him."

"By judging others we blind ourselves to our own evil and to the grace which others are just as entitled to as we are."

"The ultimate test of a moral society is the kind of world that it leaves to its children."

"When all is said and done, the life of faith is nothing if not an unending struggle of the spirit with every available weapon against the flesh."

"If you board the wrong train, it is no use running along the corridor in the other direction."

"We must be ready to allow ourselves to be interrupted by God."