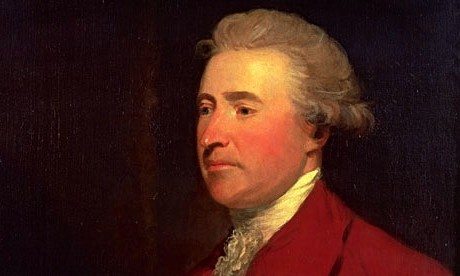 Born in 1729 in Dublin, Edmund Burke was the son of an Irish diplomat who grew up in a multicultural society. Although he was raised in the Protestant religion of his father, his mother was a Catholic, and in his youth Burke was sent to Quaker boarding school. This upbringing symbolized Burke's recent confession of religious tolerance.

"The only thing necessary for the triumph of evil is for good men to do nothing."

"Those who don't know history are doomed to repeat it."

"Woman is not made to be the admiration of all, but the happiness of one."

"Nobody made a greater mistake than he who did nothing because he could do only a little."

"Rudeness is the weak man’s imitation of strength."

"Our patience will achieve more than our force."

"Whoever undertakes to set himself up as a judge of Truth and Knowledge is shipwrecked by the laughter of the gods." [Preface to Brissot's Address to His Constituents (1794)]"

"It is ordained in the eternal constitution of things, that men of intemperate minds cannot be free. Their passions forge their fetters."

"When bad men combine, the good must associate; else they will fall one by one, an unpitied sacrifice in a contemptible struggle."

"No power so effectually robs the mind of all its powers of "acting "and reasoning as fear."