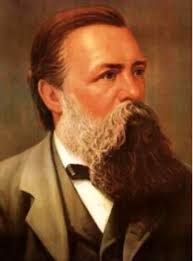 Engels was brilliant and quick, sharp, and cordless with his judgments. His versatility was amazing. He was a successful businessman, and he understood almost every branch of the natural sciences, biology, chemistry, botany and physics. He was a highly regarded expert in military affairs. He knows many languages, including all Slavic languages, in which he plans to write a comparative grammar. He also knew Gothic, Old Nordic, and Old Saxon, learned Arabic, and within three weeks he learned Persian which he said was "just a child's play." His English, spoken and written, could not be compared. He was described as "stubborn in 20 languages."

"An ounce of action is worth a ton of theory."

"Thus at every step we are reminded that we by no means rule over nature like a conqueror over a foreign people, like someone standing outside nature - but that we, with flesh, blood and brain, belong to nature, and exist in its midst, and that all our mastery of it consists in the fact that we have the advantage over all other creatures of being able to learn its laws and apply them correctly."

"...it was always our view that in order to attain this [proletarian revolution] and the other far more important aims of the future social revolution, the working class must first take possession of the organised political power of the state and by its aid crush the resistance of the capitalist class and organise society anew."

"A revolution is certainly the most authoritarian thing there is; it is the act whereby one part of the population imposes its will upon the other part by means of rifles, bayonets and cannon - authoritarian means, if such there be at all; and if the victorious party does not want to have fought in vain, it must maintain this rule by means of the terror which its arms inspire..."

"The proletarians, driven to despair, will seize the torch which Stephens has preached to them; the vengeance of the people will come down with a wrath of which the rage of 1795 gives no true idea. The war of the poor against the rich will be the bloodiest ever waged."

"All the other large and small nationalities and peoples are destined to perish before long in the revolutionary world storm... The next world war will result in the disappearance from the face of the earth not only of reactionary classes and dynasties, but also of entire reactionary peoples. And that, too, is a step forward."

"One day we shall certainly 'reduce' thought experimentally to molecular and chemical motions in the brain; but does that exhaust the essence of thought?"

"The proletariat uses the State not in the interests of freedom but in order to hold down its adversaries, and as soon as it becomes possible to speak of freedom the State as such ceases to exist."

"If there were no Frenchwomen, life wouldn't be worth living."

"Competition permits the capitalist to deduct from the price of labour power that which the family earns from its own little garden or field; the workers are compelled to accept any piece wages offered to them, because otherwise they would get nothing at all, and they could not live from the products of their small-scale agriculture alone, and because, on the other hand, it is just this agriculture and landownership which chains them to the spot and prevents them from looking around for other employment."