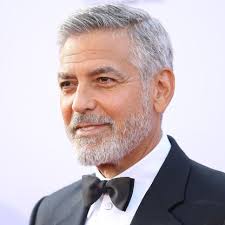 Actor and director George Clooney hit his split role in 1992 as Dr. Doug Ross on ER's TV. The hit show led to major roles in the film, including an opportunity as Batman. In 2005, Clooney won the Academy Award for his outstanding performance in Syriana. TIME magazine called the character "The Last Movie Star," and People magazine also dubbed him "Sexiest Man Alive." In 2014, Clooney married state attorney and activist Amal Alamuddin.

"You never really learn much from hearing yourself speak."

"Directing is really exciting. In the end, it's more fun to be the painter than the paint."

"I enjoy going on motorcycle trips and stopping in small towns and enjoying drinks with the locals."

"I think people in Italy live their lives better than we do. It's an older country, and they've learned to celebrate dinner and lunch, whereas we sort of eat as quickly as we can to get through it."

"In doing the screenplay for 'Good Night, and Good Luck,' the most important thing for me was to constantly go back to wherever the opposition would argue. So I had to keep reading all the books and articles about why McCarthy is such a good guy."

"I use my film-making to work through my deep questions and my deep problems. I think I could watch each film and tell you exactly which part of my psyche I'm trying to work out."

"If people see me having dinner with a beautiful woman, they immediately believe that I'm having a love affair with her. Of course that's rubbish. I'm not a playboy!"

"But I'm kind of comfortable with getting older because it's better than the other option, which is being dead. So I'll take getting older."

"Yes, I slouch. My mother tells me that."

"I bought a piano once because I had the dream of playing As Time Goes By as some girl's leaning on it drinking a martini. Great image. But none of it worked out. I can't even play Chopsticks. But I've got a nice piano at my house!"

"I've been working with Pat Robertson on Africa debt-relief, and we disagree on virtually everything except certain very specific, inalienable rights, and the truth is that morality and patriotism come in all shapes and sizes."