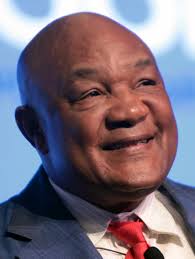 "They'll take everything, even your tears."

"Don't be afraid to employ people who will force you out of your comfort zone."

"Many people fail not so much because of their mistakes; they fail because they are afraid to try."

"To be successful in life, you must get in the habit of turning negatives into positives."

"Nobody can do everything well, so learn how to delegate responsibility to other winners and then hold them accountable for their decisions."

"Without appreciation and respect for other people, true leadership becomes ineffective, if not impossible."

"To succeed in business, you need somebody in your corner who cares enough to challenge you and is courageous enough to tell you the truth, especially when the pressure is on."

"The best entrepreneurs have found a way to serve others and as a result discover their greatest fulfillment."

"In your business or in your close relationships, if you want people to perform Herculean feats on your behalf, they must know that you care about them."

"Filling a need is not merely good business; it's a basic attitude towards life. If you see a need, do whatever you can to meet that need."

"You never help others by allowing them to getaway with giving less than their best efforts."