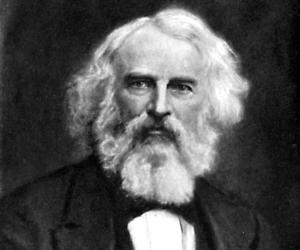 Henry Wadsworth Longfellow was a Harvard student who had knowledge of several European languages. He was greatly influenced by Romanticism and made a name for himself as a poet and novelist with works such as Hyperion, Evangeline, Poems on Slavery and The Song of Hiawatha. He was also known for his rendition of Dante's The Divine Comedy.

"Every man has his secret sorrows which the world knows not; and often times we call a man cold when he is only sad."

"The love of learning, the sequestered nooks, And all the sweet serenity of books"

"For after all, the best thing one can do when it is raining is let it rain."

"Music is the universal language of mankind."

"Silently, one by one, in the infinite meadows of heaven, Blossomed the lovely stars, the forget-me-nots of the angels."

"If we could read the secret history of our enemies, we should find in each man's life sorrow and suffering enough to disarm all hostility."

"Every heart has its secret sorrows which the world knows not, and oftentimes we call a man cold, when he is only sad."

"Be still, sad heart! and cease repining; Behind the clouds is the sun still shining; Thy fate is the common fate of all, Into each life some rain must fall"

"I do not believe anyone can be perfectly well, who has a brain and a heart"

"My soul is full of longing for the secret of the sea, and the heart of the great ocean sends a thrilling pulse through me."

"A torn jacket is soon mended, but hard words bruise the heart of a child."

"I heard the bells on Christmas Day Their old, familiar carols play, And wild and sweet The words repeat Of peace on earth, good-will to men!"