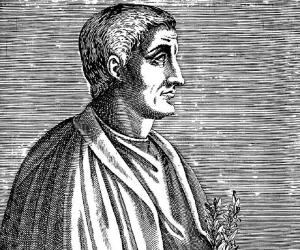 Horace, whose real name was Quintus Horatius Flaccus, was the leading Roman poet of the August Season. He was a member of a literary movement comprising Virgil and Lucius Varius Rufus. The most common themes in his works were love, the pleasures of friendship and simple life, and the art of poetry. His most important work is "Ars Poetica" which has influenced many plays and writers including Lope de Vega, Michel de Montaigne, Henry Fielding, Calderón de la Barca, Pierre Corneille, Samuel Johnson, Goethe, Voltaire and Diderot. His works also had a profound impact on recent writers including Ben Jonson, Alexander Pope, W.H. Auden, Robert Frost, and many others. His other important works were “Odes”, “Epode”, “Satires”, “Epistles” and “Carmen Saeculare”.

"Pulvis et umbra sumus. (We are but dust and shadow.)"

"Begin, be bold, and venture to be wise."

"Caelum non animum mutant qui trans mare currunt. (They change their sky, not their soul, who rush across the sea.)"

"Rule your mind or it will rule you."

"He who is greedy is always in want"

"In love there are two evils: war and peace."

"Anger is a brief madness."

"Wisdom is not wisdom when it is derived from books alone"

"A picture is a poem without words."

"Adversity has the effect of eliciting talents which, in prosperous circumstances, would have lain dormant."

"Once a word has been allowed to escape, it cannot be recalled."