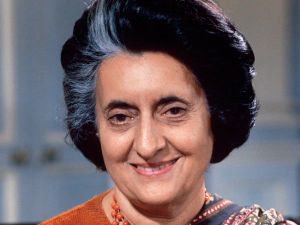 First child of Jawaharlal Nehru, India's first prime minister, Indira Gandhi, rose to prominence after her death in the mid-1960s. Gandhi survived a war-torn party, emerged as a prominent leader and thanked in part for her efforts to revive the agricultural industry. Promoted to power in 1977, Gandhi was re-elected prime minister in 1980, and she remained in office until her assassination in 1984.

"People tend to forget their duties but remember their rights."

"You can't shake hands with a clenched fist."

"My grandfather once told me that there were two kinds of people; those who do the work and those who take the credit. He told me to try to be in the first group; there was much less competition."

"Winning or losing of the election is less important than strengthening the country."

"We have to prove to the disinherited majority of the world that ecology and conservation will not work against their interest but will bring an improvement in their lives."

"I have lived a long life, and I am proud that I spend the whole of my life in the service of my people. I am only proud of this and nothing else. I shall continue to serve until my last breath, and when I die, I can say, that every drop of my blood will invigorate India and strengthen it."

"I think basically I'm lazy, but I have a housewife's mentality when I go about my job."

"Even if I died in the service of the nation, I would be proud of it. Every drop of my blood... will contribute to the growth of this nation and to make it strong and dynamic."

"Have a bias toward action - let's see something happen now. You can break that big plan into small steps and take the first step right away."

"There is not love where there is no will."

"There exists no politician in India daring enough to attempt to explain to the masses that cows can be eaten."