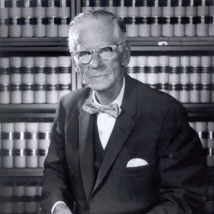 George E. Allen, Sr. was born in 1885 in Lunenburg County, Virginia. He entered law in 1910 in Victoria, Virginia, after graduating from the University of Virginia School of Law. Allen was chairman of the state of Virginia from 1916 to 1920 and a trial lawyer, he and his three sons, founded the law firm of Allen, Allen, Allen & Allen. After practicing law for more than two decades in southern Virginia, he moved to Richmond in 1931 where he established a reputation as a lawyer. From 1950 to 1960, he served as President of the Richmond Bar Association, from 1951-1953 as a faculty member of the Law-Science Institute, and from 1953 to 1954 as an American College of Trial Lawyers. He was the first president of the Virgin Trial Lawyers Association, from 1959-1960. In 1965, at the age of 80, he was named the first recipient of the Award for C ibous Advocacy by the American College of Trial Lawyers for representing an African-American Harvard student who was accused of serious abuse in 1963 after a clash with police. Mr Allen was also the founder of the International Academy of Trial Lawyers. He served as an IATL diary in 1966. Allen continued to practice law until his death in 1972, even challenging the Federal Tort Claims Act before the United States Supreme Court just a few months before his death at the age of 87. In 1976, four years after his death, the sons of Mr. Allen, Ashby, Wilbur, and George Jr., of the Allen, Allen, Allen & Allen law firm, presented a challenging gift to the University of Richmond to establish the George E. Allen seat in Law in memory of his father . It was the first chair dedicated to T-history. C. Williams School of Law.

Persevere and get it done.