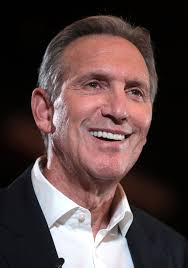 Born in Brooklyn, New York, on July 19, 1953, Howard Schultz graduated from North American University with a bachelor's degree in communications before becoming director of sales and marketing activities for Starbucks Coffee Company in 1982. After founding the coffee company Il Giornale in 1987, he bought Starbucks and became CEO and chairman of the company. Schultz publicly announced his resignation from the position of CEO of Starbucks in 2000, although he returned to lead the company from 2008 to 2018. He said his intention was to run for president in 2020, before ending his election in September 2019.

"In times of adversity and change, we really discover who we are and what we're made of."

"Mass advertising can help build brands, but authenticity is what makes them last. If people believe they share values with a company, they will stay loyal to the brand."

"People want guidance, not rhetoric. They need to know what the plan of action is, and how it will be implemented. They want to be given responsibility to help solve the problem and authority to act on it."

"My passion. My commitment. This is the most important thing in my life other than my family."

"One of the fundamental aspects of leadership, I realized more and more, is the ability to instill confidence in others when you yourself are feeling insecure"

"Authentic brands don't emerge from marketing cubicles or advertising agencies. They emanate from everything the company does..."

"The future of America is not an entitlement. We have been given a treasure chest of gifts and opportunities, but some people are being left behind, and success is not sustainable unless it is shared."

"Success is best when it's shared."

"If you examine a butterfly according to the laws of aerodynamics, it shouldn't be able to fly. But the butterfly doesn't know that, so it flies"