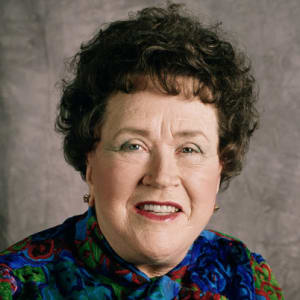 After studying at a French school, Julia Child collaborated with the cookbook Mastering the Art of French Cooking, which became a sales reporter in 1961. The child was followed by the introduction of the French French Chef on a small screen, and strengthened his reputation as an industry icon with additional books and TV appearances, until his death in 2004. She was also a writer after the 2009 film Julie and Julia, based on Julie Powell's cooking blog.

The only real stumbling block is fear of failure. In cooking you’ve got to have a ‘What the hell?’ attitude.

“Find something you’re passionate about and keep tremendously interested in it.”

“The only real stumbling block is fear of failure. In cooking you’ve got to have a what-the-hell attitude.”

“People who love to eat are always the best people.”

“The only time to eat diet food is when you’re waiting for a steak to cook.”

“I enjoy cooking with wine. Sometimes I even put it in the food.”

“Always remember: if you’re alone in the kitchen and you drop the lamb, you can always just pick it up. Who’s going to know?”

“No-one is born a great cook, one learns by doing.”

“You never forget a beautiful thing that you have made,’ [Chef Bugnard] said. ‘Even after you eat it, it stays with you – always.”

“Just like becoming an expert in wine–you learn by drinking it, the best you can afford–you learn about great food by finding the best there is, whether simply or luxurious.”

“But I was a pure romantic, and only operating with half my burners turned on.”

“One of the secrets, and pleasures, of cooking is to learn to correct something if it goes awry; and one of the lessons is to grin and bear it if it cannot be fixed.”