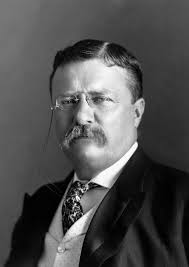 Theodore Roosevelt was governor of New York before he became president of the U.S. At age 42, Roosevelt became the youngest person to take over the presidency of the United States after the assassination of President William McKinley in 1901. He won a second sentence in 1904. Known for his anti-monopoly policies and conservation, Roosevelt won the Nobel Peace Prize. and part of the end of the Russian-Japanese War.

It is hard to fail, but it is worse never to have tried to succeed.

Believe you can and you’re halfway there.

"The person who succeeds is not the one who holds back, fearing failure, nor the one who never fails... but rather the one who moves on im spite of failure. Far better to dare mighty things, to win glorious triumphs, even though checkered by failure, than to take rank with those poor spirits who neither enjoy much nor suffer much because they live in the grey twilight that knows not victory or defeat. Author: Teddy Roosevelt"

"One of our defects as a nation is a tendency to use what have been called ''weasel words.'' When a weasel sucks eggs the meat is sucked out of the egg. If you use a ''weasel word'' after another there is nothing left of the other."

"No man is above the law and no man is below it; nor do we ask any man's permission when we ask him to obey it"

"Every man among us is more fit to meet the duties and responsibilities of citizenship because of the perils over which, in the past, the nation has triumphed; because of the blood and sweat and tears, the labor and the anguish, through which, in the"

"Our chief usefulness to humanity rests on our combining power with high purpose. Power undirected by high purpose spells calamity, and high purpose by itself is utterly useless if the power to put it into effect is lacking."

"In life, as in a football game, the principle to follow is:hit the line hard."