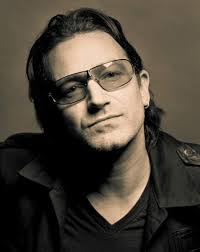 Bono is an Irish artist who joined the band U2 while still in high school. The third album of the third group, Joshua Tree, made the stars of the world. Bono has used his celebrity to focus on global problems, including global poverty and AIDS. Bono was named "Man of the Year" by TIME magazine in 2005, and Queen Elizabeth II made him a respected knight in 2007.

"Pop music often tells you everything is OK, while rock music tells you that it's not OK, but you can change it."

"Stop asking God to bless what you're doing. Find out what God's doing. It's already blessed."

"Christians are hard to tolerate; I don’t know how Jesus does it"

"Sometimes religion gets in the way of God."

"To be one, to be united is a great thing. But to respect the right to be different is maybe even greater."

"Feelings are much stronger than thoughts. We are all led by instinct, and our intellect catches up later"

"Dream up the kind of world you want to live in. Dream out loud."

"In general people put too much faith in the rich, the famous, the politicians, and not enough faith in themselves."

"Perspective is the cure for depression."

"Every age has its massive moral blind spots. We might not see them, but our children will."