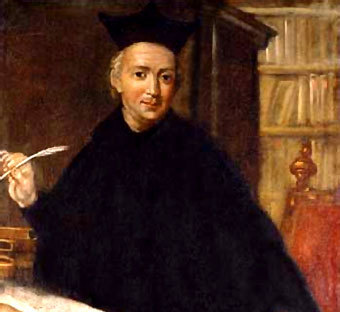 Baltasar Gracián y Morales was born in Belmonte de Gracián in 1601 and died in Tarazona in 1658. The son of a civil servant, he studied at the Jesuit college at Calatayud and the University of Huesca. In 1619 he joined the Company of Jesus. He was ordained priest in 1635. He confessed to Viceroy Nochera, and accompanied him to Madrid where he became friendly with the poet Hurtado de Mendoza. His enemies within the Jesuit order made sure that he was sent to Lerida to defy the Catalan rebellion. He was Philip IV's brief secretary. His health deteriorated long after he was punished for eating bread and water imposed by Jacinto Piquer, in the province of Aragon (a religious official in the province). The influence of his work, beautiful and hopeless, continued until post-modern times.

Be content to act, and leave the talking to others.

"Better mad with the rest of the world than wise alone."

"The wise does at once what the fool does at last."

"Never have a companion that casts you in the shade."

"Always leave something to wish for; otherwise you will be miserable from your very happiness."

"Dreams will get you nowhere, a good kick in the pants will take you a long way."

"Never contend with a man who has nothing to lose."

"Never do anything when you are in a temper, for you will do everything wrong."

"Know or listen to those who know."

"The passions are the humors of the mind, and the least excess sickens our judgment. If the disease spreads to the mouth, your reputation will be in danger."

"It is better to have too much courtesy than too little, provided you are not equally courteous to all, for that would be injustice"

"One deceit needs many others, and so the whole house is built in the air and must soon come to the ground"