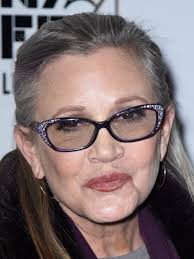 Actress Carrie Fisher has shot to surprise her role as Princess Leia in Star Wars and their sequel made her famous. She fought against alcohol and drug abuse in the 1980's, but returned in 1987 with his book Postcards from the Edge, in which he adapted it into a film starring Meryl Streep. She went on to play supporting roles in films and was a prolific writer and screenwriter. Fisher once again played her role in Lea for Star Wars: Episode VII - The Force Awakens in 2015. Fisher died on December 27, 2016, just days after a massive heart attack. She was 60 years old.

"Resentment is like drinking poison and waiting for the other person to die."

"Karl Marx: "Religion is the opiate of the masses." Carrie Fisher: "I did masses of opiates religiously."

"If my life wasn't funny it would just be true, and that is unacceptable."

"Sometimes you can only find Heaven by slowly backing away from Hell."

"There's no room for demons when you're self-possessed."

"Actually,I am a failed anorexic. I have anorexic thinking, but I can't seem to muster the behavoir"

"I feel I'm very sane about how crazy I am."

"I shot through my twenties like a luminous thread through a dark needle, blazing toward my destination: Nowhere."

"What worries me is, what if this guy is really the one for me and I just haven't had enough therapy yet for me to be comfortable with having found him."

"Life is a cruel, horrible joke and I am the punch line."