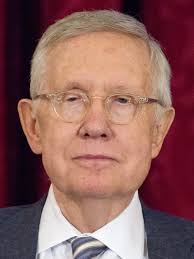 Senate Minerals Leader Leader Reid announced on March 27 that he was stepping down from the Senate at the end of his current term in 2016, ending months of speculation. His 33-year stint has drawn five presidents and numerous Senate floor debates with Republican rivals. Reid made his retirement announcement in a three-minute video posted on YouTube and Twitter. On the day he was first sworn in at the House in 1983, a Time magazine article began with the advent of his computer, which "went into offices, schools and homes."

"They couldn't go for her because she was an independent woman."

"There's no question the economy's in big trouble, ... We have to look at what's good for the average American."

"We certainly are not about to declare victory,"

"We're almost there. We're not there. We still have some obstacles. The leader and I have spoken about them the last few hours. There's other pieces of legislation that may interfere. We have some amendments we have to vote on that are going to be hurtful to some people and not to others."

"We must find ways to get them the resources they need and bring them to safety,"

"Justice O'Connor has been a voice of moderation and reason on the court and should be replaced by someone who, like her, embodies the fundamental American values of fairness, liberty and equality,"

"It is especially important to identify a consensus candidate to succeed Justice O'Connor, who has been a voice of reason and moderation."

"The families in the Gulf ... certainly don't need to hear another speech from President Bush,"

"The president offered comforting words tonight, but the victims of Hurricane Katrina don't need just words, they need a plan that will lead the way in recovery, rebuilding, and renewal."

"The president has made his choice, ... Now the Senate will do its job of deciding whether to confirm John Roberts to a lifetime seat on the Supreme Court."