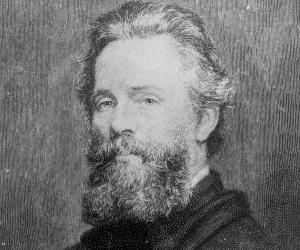 Herman Melville was born in New York City in 1819. He served as a member of several sailors starting in 1839, his experience receiving his first successful novels Typee (1846) and Omoo (1847). Subsequent books, including his masterpiece, Moby-Dick (1851), were sold out, and by the 1860's Melville had become a poet. After his death in New York City in 1891, he was eventually regarded as one of America's greatest writers.

"It is better to fail in originality than to succeed in imitation."

"I know not all that may be coming, but be it what it will, I'll go to it laughing."

"A smile is the chosen vehicle of all ambiguities."

"I do not think I have any uncharitable prejudice against the rattlesnake, still, I should not like to be one."

"Better to sleep with a sober cannibal than a drunk Christian."

"It is not down on any map; true places never are."

"Of all the preposterous assumptions of humanity over humanity, nothing exceeds most of the criticisms made on the habits of the poor by the well-housed, well- warmed, and well-fed."

"As for me, I am tormented with an everlasting itch for things remote. I love to sail forbidden seas, and land on barbarous coasts."

"I try all things, I achieve what I can."

"I would prefer not to."

"Talk not to me of blasphemy, man; I'd strike the sun if it insulted me."