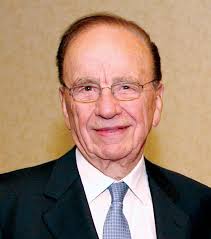 Rupert Murdoch's father was a prominent military writer and newspaper columnist. Murdoch inherited his father's papers, the Sunday Mail and News, and went on to buy more media over the years. In the 1970's, he began buying American newspapers. Murdoch appeared in entertainment with the acquisition of 20th Century Fox Film Corp. in 1985, and later led to the transformation of the cable TV landscape by introducing Fox News. Four years after reorganizing his empire into two divisions, 21st Century Fox Inc. and News Corp., Murdoch in 2017 sold the 21st Century Fox to the Walt Disney Company.

Journalists should think of themselves as outside the Establishment, and owners can't be too worried about what they're told at their country clubs.

CNN is pretty consistently on the left, if you look at their choice of stories, what they play up. It's not what they say. It's what they highlight.

My father left me with a clear sense that the media was something different.

I feel that people I trusted - I don't know who, on what level - have let me down, and I think they have behaved disgracefully, and it's for them to pay. And I think, frankly, that I'm the best person to see it through.

We certainly employ a lot of immigrants at Fox... and we do not take any consistent anti-immigrant line.

I felt that it's best just to be as transparent as possible.

It's been a long career, and I've made some mistakes along the way.

Look, the whole world wants to modernize, and when you look to what they mean by modernizing, they mean Americanize. Would a modern Greek prefer to live in Orange County than Piraeus? Yes. Absolutely.

I was brought up in a publishing home, a newspaper man's home, and was excited by that, I suppose. I saw that life at close range and, after the age of ten or twelve, never really considered any other.

Now if you look at the London 'Times,' you'll find that with quite a number of the photographs, you touch them, and they turn into videos. I think newspapers come alive that way. We talk about 'papers.' We should cut out the word 'paper,' you know? It's 'news organizations.'