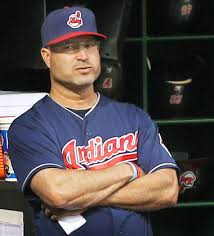 Manuel Elias Acta (born January 11, 1969) has been a veteran baseball manager and broadcast analyst for ESPN and ESPN Deportes. He has worked as a manager for the Washington Nationals and Cleveland Indians in Major League baseball. In the Dominican winter, he ruled the Tigres del Licey from 2003 to 2005, which led to his victory in the 2004 Caribbean Series. Acta led the Dominican Republic team to the 2006 World baseball Classic.

"Back at home, everybody always thought that David was going to be big time. When he was in Minnesota, a lot of people thought that he was going to be a productive hitter there. But he's moved on to a bigger market and he's done what he's done, and he deserves everything that he's getting."

"Cabrera just stepped up and did a great job."

"This will be a game watched by every Dominican soul, the 8 million we have on the island and all the others spread around the world."

"Our guys take it very serious and show a lot of pride in this kind of stuff."

"I don't want the word patriotism being brought up over here because of these guys being professional and (some) other teams are not. Because when you have $100 million in the bank and a contract and you leave everything and take a chance and come over here and play for your country, if that isn't patriotism, I don't know what it is."

"Everybody who had the desire to play prepared themselves for this tournament. Our guys saw enough pitches. They had enough at-bats. No excuses."

"I am worried about the health of our best starters, but they have the desire to play and that makes me happy."

"I think everybody in baseball knew, even before the All-Star break last year, that we were going to play this Baseball Classic, and everybody that had the desire to play prepared themselves to play for this tournament. Yes, they didn't have 100 at-bats or whatever before this, but we got all the way to the seventh game. We played two rounds, the guys saw enough pitches, they had enough at-bats. There are no excuses."

"It's a short tournament and we have to stay humble about it. It's baseball and anything can happen. We feel very good about the group we got here. We actually have the group we wanted and they seem to have the special love to play for their country."

"There's still a lot of baseball left in Sosa, he's only had one bad year and has a lot to offer the Dominican team."

"I believe that part of what the World Classic did was remind people that baseball talent comes from all over the world. There are a lot of people playing this game."