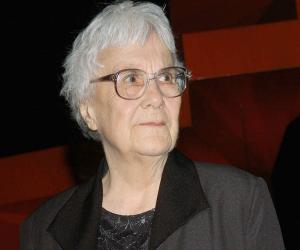 In 1959, Harper Lee completed his draft of the Pulitzer Prize for the Mockingbird Assassination. Shortly afterwards, he helped another writer and his friend Truman Capote write a New Yorker that would eventually work on the mythical art, Cold Blood. In July 2015, Lee published his second novel, Go Set a Watchman, which was written before Mckingbird Killed and portrays the lives of the characters behind her Pulitzer Prize-winning book.

"You never really understand a person until you consider things from his point of view... Until you climb inside of his skin and walk around in it."

"Until I feared I would lose it, I never loved to read. One does not love breathing."

"People generally see what they look for, and hear what they listen for."

"The one thing that doesn't abide by majority rule is a person's conscience."

"Atticus told me to delete the adjectives and I'd have the facts."

"I think there's just one kind of folks. Folks."

"Atticus, he was real nice." "Most people are, Scout, when you finally see them."

"People in their right minds never take pride in their talents."

"It was times like these when I thought my father, who hated guns and had never been to any wars, was the bravest man who ever lived."

"You just hold your head high and keep those fists down. No matter what anybody says to you, don't you let 'em get your goat. Try fightin' with your head for a change. -Atticus Finch"

"Real courage is when you know you're licked before you begin, but you begin anyway and see it through no matter what."