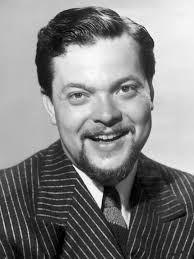 Orson Welles began his career as a stage actor before going on the radio, creating a memorable HG genre. Wells's War of the Worlds. In Hollywood, he left his mark unparalleled in the arts with works such as Citizen Kane and The Magnificent Ambersons. She died of a heart attack in Los Angeles, California, on October 10, 1985.

"In my real movie-going days, which were the thirties, you didn't stand in line. You strolled down the street and sallied into the theater at any hour of the day or night."

"I don't like television when it gets near to photographed plays."

"I drag my myth around with me."

"As for my style, for my vision of the cinema, editing is not simply one aspect; it's the aspect."

"If I had only one film in the world to save, it would be 'Grand Illusion.'"

"Why spend 18 hours watching someone else's war, when you know how it comes out? We win, and then have to buy all their cars."

"Old age is the only disease you dont want to be cured of."

"The trouble with a movie is that it's old before it's released. It's no accident that it comes in a can."

"I don't regard my career as something so precious that it comes before my convictions."

"The basic and essential human is the woman."

"I don't think any word can explain a man's life."

"I don't pray really, because I don't want to bore God."